Writing an OS is one of those projects that I've always kinda wanted to do, but never felt like I had enough experience or knowledge to actually follow through on. Every few years though, I end up opening the OSDev Wiki, and thinking "What if..."

Well, now that I'm trying to learn Rust, I have a perfect excuse to write my own toy operating system. After around a day of programming, this post is about what I learned, and what I'm learning in the process. 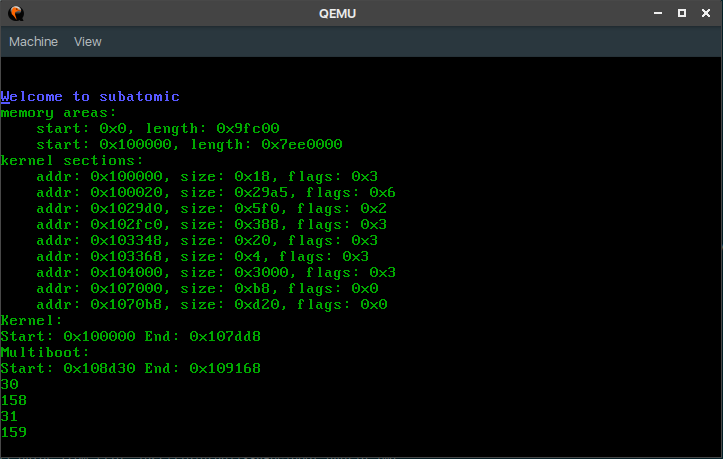 First, why Rust for a toy operating system? There are a few reasons:

The most surprising thing about this was how easy it was! I started out by following the intermezzOS tutorial, which got me set up with the x86 ASM, bootloader, and emulator. The intermezzOS tutorial was by far the best one that I came across, but it's incomplete at the moment. That was alright though, because you can pretty easily pick up where intermezzOS leaves off with Philipp Oppermann's "Writing an OS in Rust" series. That doesn't go into keyboard input though (or input of any kind!), so I went to Bare Metal Rust. That's not complete yet either, but it was enough to set up a polling keyboard driver! (interrupts are another battle for another day...)

Here are my notes from the process:

If you'd like to check out what I have so far, here it is! The code's pretty bad, since it's my first major Rust project, and it doesn't do much, but I'm proud of it nonetheless 😊.