In Part 4, I covered how to make a state-space model of a system to make running simulations easy. In this post, I'll talk about how to use that model to make a controller for our system.

For this post, I'm going to use an example system that I haven't talked about before - A mass on a spring:

If we call \(p\) the position of the cart (we use \(p\) instead of \(x\), since \(x\) is the entire state once we're using a state space representation), then we find that the following equation describes how the cart will move:

You can derive this from Hooke's Law if you're interested, but the intuitive explanation is that the spring pulls back against the cart proportionally to how far it is away from the equilibrium state of the spring, but gets slowed down the heavier the cart is.

Where \(c\) is the "damping coefficient" - essentially the amount of friction acting on the cart.

Now that we have this equation, let's convert it into state space form!

This system has two states - position, and velocity:

Since \(x\) is a vector of length 2, \(A\) will be a 2x2 matrix. Remember, a state space representation always takes this form:

The way that I like to think about this is that each number in the matrix is asking a question - how does X affect Y? So, for example, the upper left number in the A matrix is asking "How does position affect velocity?". Position has no effect on velocity, so the upper left number is zero. Next, we can look at the upper right number. This is asking "How does velocity affect velocity?" Well, velocity is velocity, so we put a 1 there (since you need to multiply velocity by 1 to get velocity). If we keep doing this process, we get the following equation: 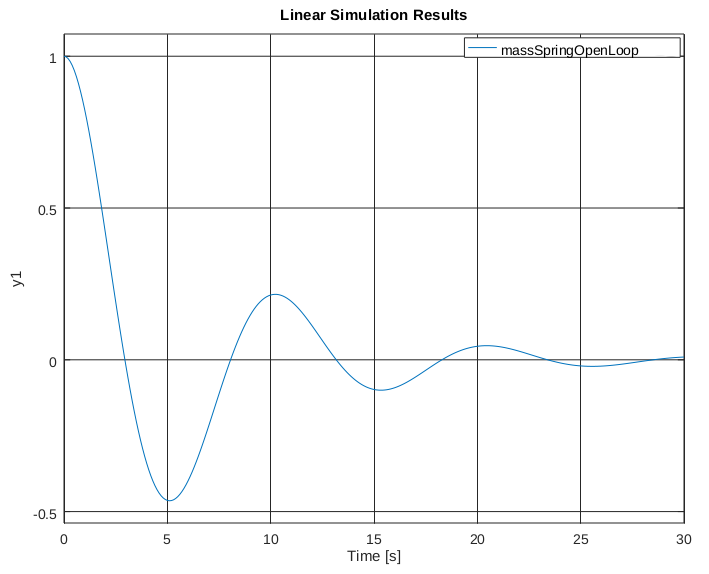 Notice that this plot shows two things happening - the position is oscillating, but also decreasing. There's actually a way to quantify how much the system will oscillate and how quickly it will converge to zero (if it does at all!). In order to see how a system will act, we look at the "poles" of the system. In order to understand what the poles of a system mean, we need to take a quick detour into linear algebra.

So how does this all relate to state space systems? Well, the eigenvalues of the system (also called the poles of a system) have a direct effect on the response of the system. Let's look at our eigenvalues for our system above. Plugging the matrix into octave/matlab gives us:

That explains real eigenvalues, but what about imaginary eigenvalues? Let's imagine a system that has two poles, at \(0+0.1i\) and \(0-0.1i\). Since this system has a real component of zero, it will be marginally stable, but since it has an imaginary component, it will oscillate. Here's a way of visualizing this system:

Now, let's design a controller that will stop there from being any oscillation, and drive the system to zero much more quickly. Remember, all "designing a controller" means in this case is finding a matrix \(K\), where setting \( u = Kx \) will cause the system to respond in the way that you want it to. How do we do this? Well, it turns out that it's actually fairly easy to place the poles of a system wherever you want. Since we want to have no oscillation, we'll make the imaginary part of the poles zero, and since we want a fast response time, we'll make the real part of the poles -2.5 (this is pretty arbitrary). We can use matlab/octave to find what our K matrix must be to have the poles of the closed loop system be at -2.5:

Which gives us the output:

So our K matrix is:

And running a simulation of the system with that K matrix gives us: 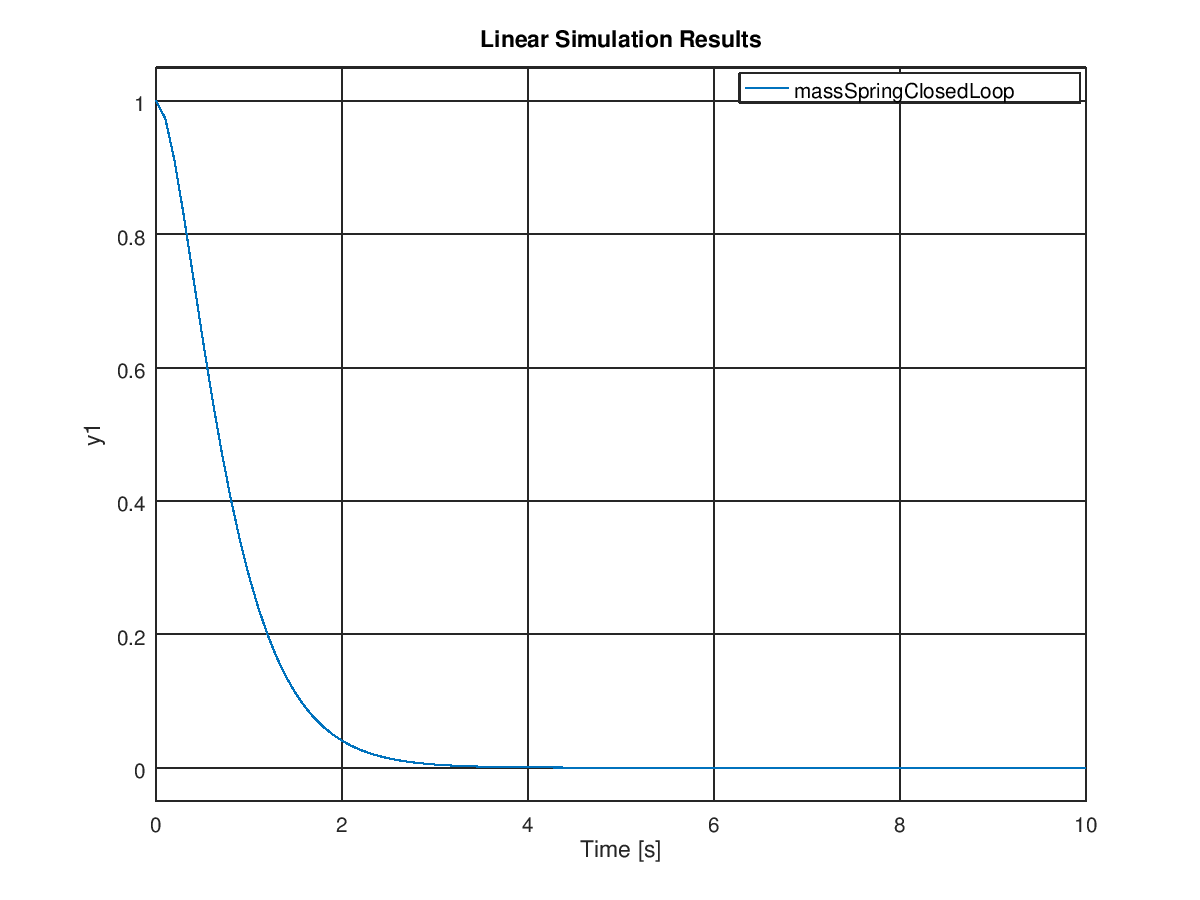 Much better! It converges in under five seconds with no oscillation, compared with >30 seconds with lots of oscillations for the open-loop response. But wait, if we can place the poles anywhere we want, and the more negative they are the faster the response, why not just place them as far negative as possible? Why not place them at -100 or -1000 or -100000? For that matter, why do we ever want our system to oscillate, if we can just make the imaginary part of the poles zero? Well, the answer is that you can make the system converge as fast as you want, so long as you have enough energy that you can actually apply to the system. In real life, the motors and actuators that are limited in the amount of force that they can apply. We ignore this in the state-space model, since it makes the system non-linear, but it's something that you need to keep in mind when designing a controller. This is also the reason that you might want some oscillation - oscillation will make you reach your target faster than you would otherwise. Sometimes, getting to the target fast is more important than not oscillating much.

So, that's how you design a state space controller with pole placement! There are also a ton of other ways to design controllers (most notably LQR) which I'll go into later, but understanding how poles determine the response of a system is important for any kind of controller.