Note: I no longer think that this is an ideal way to learn or understand elliptic curves. While you won't learn anything incorrect from this post, this doesn't reflect my current ideas about pedagogy, and I hope to write a updated post at some point.

There are two main ways that this is done:

This post will focus on how elliptic curves can be used to provide a one-way function.

Here's a interactive graph of what this looks like:

That demo works on real numbers, but in actuality, you can define an elliptic curve over any field. A field is a set of objects that have addition, subtraction, multiplication, and division defined on them. For example, the real numbers (\(\mathbb{R}\)) are a field. In cryptography, we usually use the field "integers mod p" (\(\mathbb{Z}\bmod p\)), where \(p\) is a large prime number. I will continue to use the real numbers for the rest of this post, but know that all of the math is transferable to \(\mathbb{Z}\bmod p\), which is what is used in real crypto systems.

For points on the curve, we can define the addition operation geometrically like this: 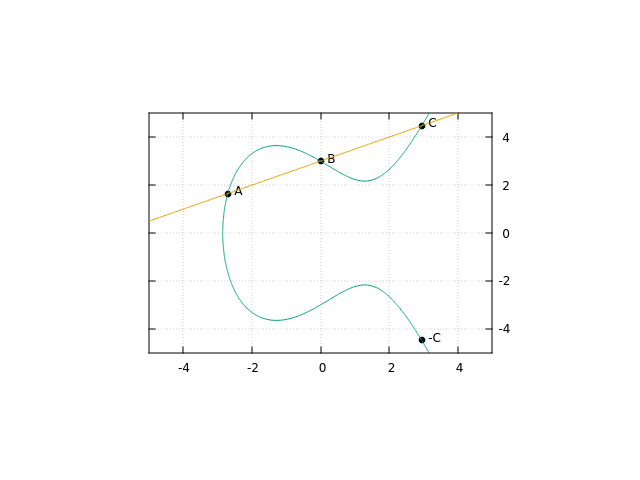 The other question that comes up is what should happen in the case that \(A = B\)? In this case, we simply take the line tangent to the curve at \(A\), and use that instead of the line going through \(A\) and \(B\). 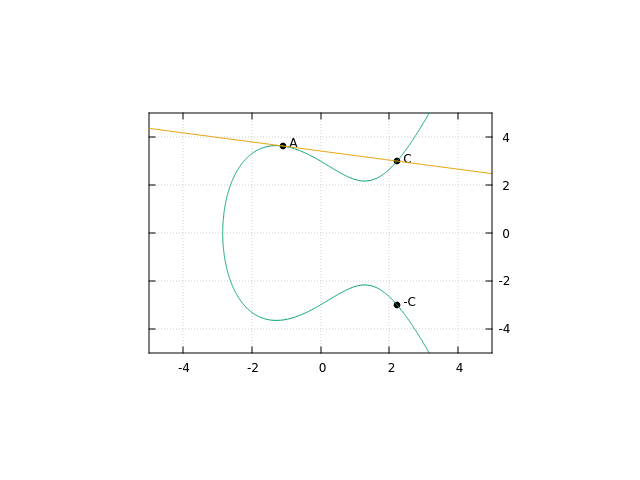 In doing this, we also define multiplication of a point on a elliptic curve - Since \(A + A = 2A\), we can simply repeatedly add the same points in order to multiply by an arbitrary number. (There are more efficient algorithms than this3, but those are beyond the scope of this article)

Now that you know what elliptic curves are, let's loop back around to our original goal: creating a one way function.

We've actually already done this: multiplication of points on an elliptic curve by a scalar is easy, but finding the scalar given the original point and the result of the multiplication is very difficult4. This is known as the Elliptic Curve Discrete Logarithm Problem5.

And there we have a one way function!

Thanks to Julian Squires, Harrison Clarke, George Tankersley, Laura Peskin, and Will Turner for comments/feedback/discussion.