I saw an article today about code review. Included in it were a couple graphs purportedly coming from a study on code review. The author didn't refer to the graphs at all in the article, instead interleaving them with unrelated text as a sort of eye-candy.

These are the graphs in question:

I found these implausible, for several reasons:

I found the claims being made off of this graph so unbelievable that I tracked down the initial study2 and decided to look into it.

There's a few things that immediately popped out at me - the first one is that the graph "Defect Density vs. LOC" graph is actually completely false - the reason that the 800 defects per kLOC figure popped out at me as being suspicious was because the scale is incorrect. Here's the real graph3: 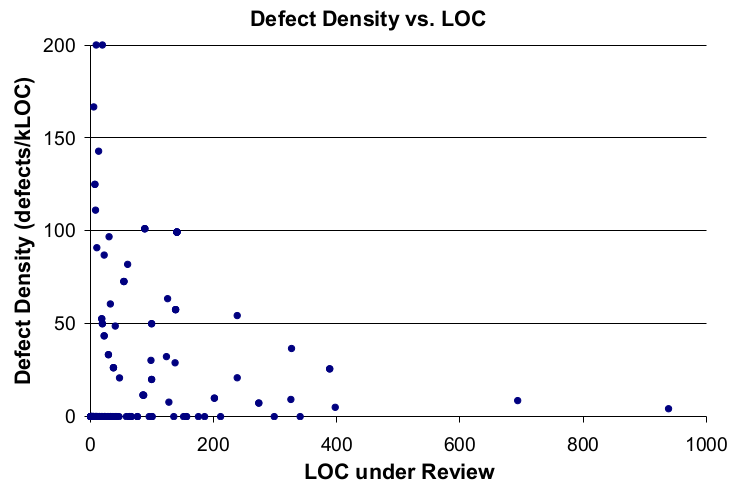 This shows about the amount of care that's put into these articles that cite this study, but let's carry on.

The next thing that popped out at me was the number of samples in the study. The marketing page for it claims that 2500 reviews were considered, but I definitely don't see 2500 datapoints on that graph - what happened? Reading the study, I found that since "defects" were a manually counted statistic, they took a SRS of 300 reviews, to reduce the amount of manual labour required. This is more reasonable, but it doesn't look to me like there are 300 datapoints in that graph - what gives? Luckily, they embedded the graph in the pdf in such a way that it's somewhat possible to recover the datapoints4. In inkscape, I get a count of 213 points. I'm still curious where the other 87 went, but let's look at the ones that we have. Of the 213 points, 147 of them appear to have a defect density of zero (69%). Of these 147 points, 138 of them appear to have been changes that were ≤100 LOC (93%). This is interesting, because it appears to be directly in contradiction to the main claim of the paper and blog post5.

So in conclusion, we have a graph that's being passed around that:

But, none of that matters, because it looks convincing enough at first glance, so it gets passed around and spread all over the internet. I am quite certain that the author of the blog post that I initially found using these images hadn't read the study that the graphs were pulled from. I don't think that this is unique to these images - I find that when I look at the actual studies that claims are pulled from, they are almost always contradictory to the claims that are being made, or have significant statistical issues. As a reader of these articles, I encourage you to think critically about the data being presented, find original sources to determine the methodology being used to collect data, and at the very least double check that the graph that you're being show actually supports the claim that's being made.